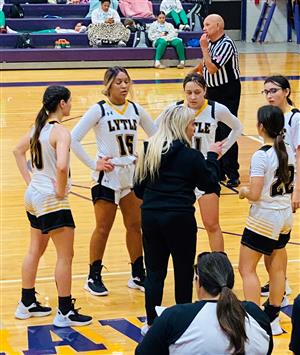 The girls had a long tough weekend of competition at the Navarro Tourney, starting Thursday December 1, 2022. We went 3-2 overall but had some wonderful team bonding. Kids stepped up each game, taking on some new roles. The first day we went 2-0, beating Floresville 55-46. We started out a little slow and missed a lot of shots but we were 16/48 from the field, everything was rolling in and out. We had a big 3rd quarter, scoring 20 points, settling down and taking control of the game. We had 38 defensive rebounds. Our posts stepped up in the paint.

Next up that afternoon was Lockhart. We won 70-45. We still did not shoot well; we were 24/77. We were getting great looks at the basket and taking great shots but we just couldn’t finish so many easy shots. We had 44 points in the paint, so we are getting to the basket. We played another game with 35 defensive rebounds. 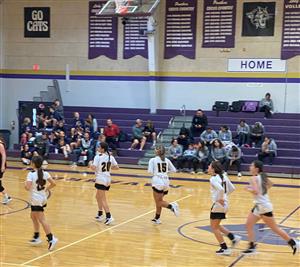 On Friday, December 2, 2022, we faced a good 5A South San team. They were fast and, man, they hit the “3-pointer” lights out of us. The Lady Pirates struggled during the first quarter and were down 9-32. We just could never recover. I can tell you what I was so proud of this team for, they never quit and kept fighting even when South San continued to press and leave his starters in until 1 minute left in the game. We played with them the rest of the game. In the 2nd quarter, we outscored them 19-16. In the 3rd quarter, they outscored us, 21-19, and in the 4th, we outscored them 22-17. I was so proud of the girls. The final score was 86-69.

That afternoon we also played my old high school, Somerset, and we came up short, 61-56. Honestly, we ran out of legs. I never subbed Cadee or Calyssa out of the games all weekend and a referee came up to me and said, “The South San game with you guys was like a Varsity Boys game up and down the court.” Thus, I could not be mad at the girls, I know they were exhausted by the end of the day and they gave me all they had.

On Saturday, December 3, 2022, we played St Agnes from out of Houston. They were a talented team for us to see. They were like us, played hard defense and ran the floor well. They were aggressive but the girls stepped up and played what I would say was the best game they had all year when looking at all categories of the game. We won 58-51. In this game, the girls played as a team and everyone stepped up. We had 28 points in the paint and out rebounded them offensively and defensively. Katara Whitfield was a beast in this game. She played the best game I have seen of her.

The girls are now 10-6 for the season and will finally have a home game here tomorrow, Tuesday, December 6, against Randolph. Go Pirates!