“Take control of your destiny. Believe in yourself. Ignore those who try to discourage you. Avoid negative sources, people, places, things and habits. Don’t give up and don’t give in.” 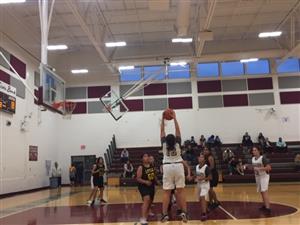 The 7th Grade Lady Pirates opened their season last night, November 18, 20201, on the road against the Wolves from Dilley. Coach Bohl had an out-of-town trip scheduled beginning Thursday afternoon so she asked if I wouldn’t mind filling in for her. It was fun to dust off the whistle and step to the sidelines one final time. I told the ladies that if they play how they practiced the Dilley team shouldn’t cause them much difficulty. I have been blessed to be surrounded by great coaches who have taught me a great deal. Coach Bippert’s goal for coaching any sport is to make the other team adjust to what you are doing. We used Coach Cross’s bunch inbounds play to have Lilly Evans score six of the nine points in the first quarter and the Dilley team had to change the position of their girls on the inbounds. The second quarter we stepped up our defense and got some fast break points. Coach Martinez taught me the importance of playing and not spending so much practice time running through more than three pass options in running Junior High offense. These girls played like there was a ten second shot clock. Their results of running the offense are to dribble forward and shoot or make one pass and shoot. This team is a group of confident shooters. They took five three-point shots and swished two. It was better than their free throw percentage which was 0 for 4 from the line. The leading scorer for the team was Aliana Cardenas with 13 points including an NBA three-point shot. Lillian Evans tallied 12 points with six shots and she played good defense on the ball. Cayleigh Smith scored 7 including an inbound three-point shot. The play was planned to score a layup but she received the ball on the three-point line, pivoted and let the ball fly. Not what was planned but basketball is 95% unplanned play. Mari Guerrero added 2 points and ran the court as the first option on the fast break. It is fun when players do what is asked of them. Camilla Vega was the sparkplug for this team. When she found out that the game was back on, she was excited because Dilley concessions had great sausage wraps. I told them if they win, I would get the 8 players sausage wraps. Well, Junior High concessions didn’t sell sausage wraps so they got hot dogs instead. Camilla is becoming a leader of this group. Sara Morquecho, Natalia Bazaldura and Brooke Tollett came off the bench to give the first five much needed rest and each had opportunities to score and each contributed to the victory. When the final horn sounded the Lytle 7th Grade scored the season opening victory. Defensively we shut out the Dilley team in the 2nd and 3rd quarters and except for two last minute shots by Dilley we should have held them to two points. It gives us room for improvement. Thanks again to Coach Bohl for allowing me to stand on the sidelines. I did call one good timeout but other than that Coach McDonald could have done just as well. I thought about pulling a Hoosiers and having the referee toss me from the game so Coach McDonald would have to coach.

The ladies would like to wish everyone the merriest of Thanksgivings. Finally, my thoughts and prayers go out to Coach Bippert, Bryan and Brandon and the Bippert family as they lay the patriarch of the family to rest today. May the sadness of the race finished be replaced with the joy of the memories of joy and love given by his father as the family gathers to mourn today yet gathers again in the week to give thanks for a live well lived. As you can see, I am only the coach that I am because of the great coaches I have had the pleasure to learn from.

“I believe that many man’s life will be filled with constant and unexpected encouragement, if he makes up his mind to do his level best each day, and as nearly as possible reaching the high water of pure and useful living.”