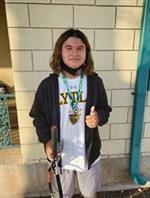 This past week the Pirate tennis teams traveled to San Antonio to partake in the Edison Bears Invitational tournament. The Junior Varsity squad had a great day of tennis with many young athletes playing well into the tournament bracket. In the end, we brought home a couple of awards. Congratulations to Sophomore Elias Moore who won the consolation bracket finals and to Sophomore Chessa Hartley-Mapes and Freshman Hector Anaya for winning the consolation mixed doubles final.

The Varsity played several matches vs some tough 5A and 6A schools and played extremely well during the duration of the tournament.